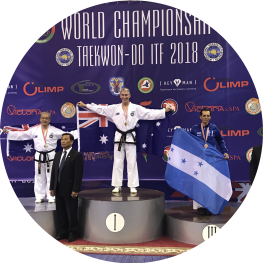 Jon Burgess recently returned from a couple of weeks away competing for Australia at the ITF Tae Kwon Do World Championships in Minsk, Belarus. It was the ‘Juniors & Veteran’ championships, which occur every two years.

Jon competed in 4 events last time (Italy 2016), though due to injury only one event this tournament. The event was individual pattern and Jon won a Gold medal, which far exceeded his expectation.