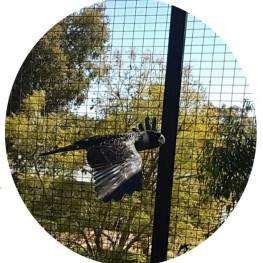 In September, Burgess Design Group was given the opportunity to sponsor the rehabilitation of a Carnaby’s Cockatoo at Kaarakin Black Cockatoo Centre. The sponsorship included naming rights, releasing the bird once rehabilitated, a tour of Kaarakin’s facility in Martin and updates on the bird’s progress once released into the wild. Burgess Design Group settled on naming the bird BuDGie, after our company name. BuDGie was taken to Kaarakin after being struck by a car in North Lake, and has been at the centre since 2014. He is towards the end of his recovery at Kaarakin and will be released in February 2017.

Kaarakin work closely with Department of Parks and Wildlife, Perth Zoo and Murdoch University to learn and help protect this beautiful species. If you are interested in supporting Kaarakin’s cause, please visit their website at https://www.blackcockatoorecovery.com/.